Virtual Tours Are Here to Stay. This Is How to Do Them Right

Crowding a stranger’s apartment on a lazy Sunday — the sport of so many New Yorkers looking to buy, rent or gawk — may never be the same.

In-person showings are once again allowed in New York City, after a monthslong ban brought on by the coronavirus, but they’re harder to schedule, more difficult to attend, and reserved for serious shoppers.

So the virtual tour, the awkward cousin of the open house, is here to stay. Parsing its many forms, from the overproduced music video to the shaky live cam, is essential to narrow the field now, at a time when pent-up supply is flooding the market and in-person tours remain elusive.

As a writer of the On the Market column, I’ve seen hundreds of apartments in person, and dozens more through choppy FaceTime calls with masked agents. The medium is different, but the tricks are largely the same. Here is a primer on what video can and can’t tell you, and how to make the most of the next best thing. Ask to see the apartment with the lights off, and make sure to check the views from every window — not just for a sense of the natural light, but whether the room faces a busy intersection.

“People assume that what you see is what you get with video,” said Allison Chiaramonte, an agent with Warburg Realty, and they’re wrong.

Yes, it’s harder to hide some flaws on video, like a tiny kitchen or a dated bathroom, but the format can be misleading. A mediocre eight-foot ceiling could look much taller if the door frames are tall, or the furniture is low. A well-lit living room could hide the fact that the window faces a brick wall.

During live video calls, Ms. Chiaramonte asks that the seller’s agent turn off all the lights and pan around the rooms. Revisiting the apartment at different times of the day is also important to gauge how much natural light the space gets.

Before a video call, review the floor plan, often available at the end of the listing photo slide show, because an odd layout can inform your tour. Does the bedroom not have a closet? (More common than you think.) Is the bathroom next to the kitchen? Is the foyer dead space?

Note the square footage, but beware of fuzzy math. There isn’t a universal standard for how to measure livable space, with some floor plans including closets or exterior walls. In any case, it’s not likely that the agent is underselling the size, so pay close attention to rooms that look small on paper.

For a primary bedroom, 10-by-10 should leave enough space to maneuver around the bed and leave room for some furniture, Ms. Chiaramonte said, but many New Yorkers make do with much less, so focus on its shape and functionality.

What You Don’t See 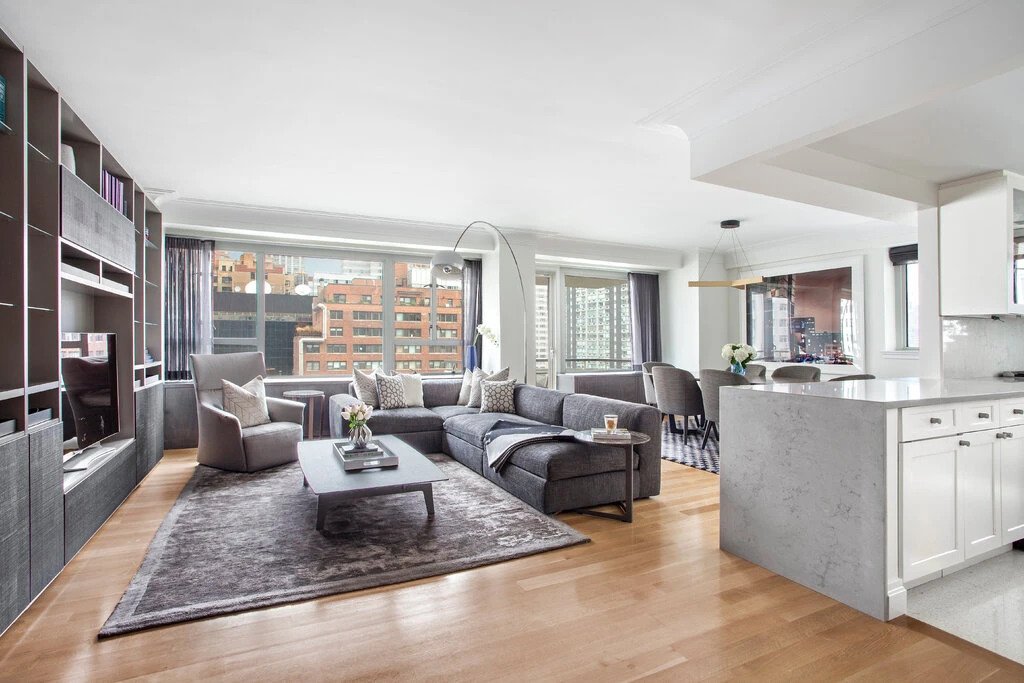 Ceiling height is important while we’re cooped up at home. This postwar apartment has eight-and-a-half-foot ceilings, but smart furnishing can make the space seem taller. Ask for the dimensions.

One pre-pandemic ploy endures: Agents who take off their shoes before a tour so the floors don’t creak, and their steps don’t echo, said Melissa Leifer, an agent with Keller Williams New York City.

The city is a noisy, smelly place, and your tour should address that head on.

“I’ve literally spent 25 minutes in a room just to see if you’ll hear noise from upstairs,” said Ross Evangelista, an agent with Berkshire Hathaway HomeServices. Don’t be shy to ask your host to linger.

Understanding the squeaks and groans of an apartment can be especially important now that so many residents work from home, and agents today, with lots of listings but few qualified leads, are more likely to indulge your requests.

“Most of the brokers are just happy I want to see” their listings, said Ms. Leifer. “So they’re like, ‘Sure, you want me to do a back flip?’”

Some questions simply can’t be resolved without an in-person visit, but ask to see how far away the elevator is from the apartment and listen for its hum. Is there a trash chute nearby or the chemical fumes of a laundry room? Does the apartment face a busy avenue or loud mechanical equipment? You won’t know your threshold for irritation without a visit, but the virtual tour can help you decide if it’s worth making the trip.

Tours Start in the Lobby 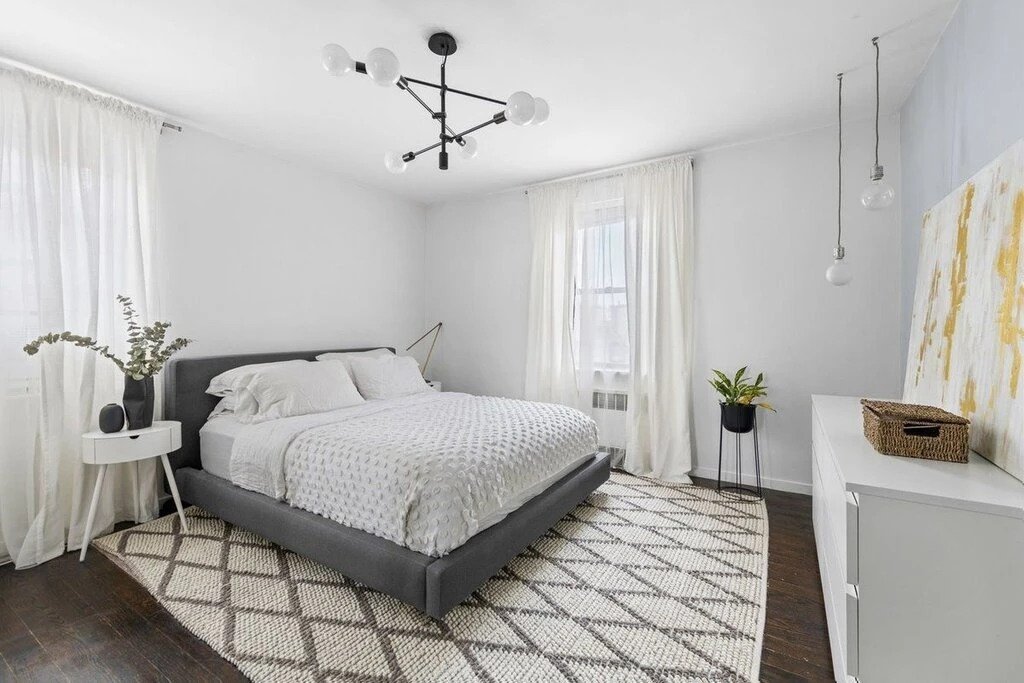 Be mindful of what isn’t shown. Is the bathroom not pictured? Does the virtual tour breeze by the kitchen? This photogenic bedroom doesn’t have a closet.

Some video tours, especially high-production recordings, would lead you to believe that the apartment is a series of panning glamour shots. But a portion of the price tag is also based on building amenities (most of which remain closed), building staff, and the walk from the curb up to your apartment.

Ask the seller’s agent for a live tour that begins in the lobby, pauses at the elevator, and lingers in the hallway outside the apartment. How many units are on the floor? Does the building enforce social distancing and new elevator protocols? Are the common spaces in need of renovation?

“This isn’t a marketing video,” said Natalie Eisen Newburgh, an agent with CORE. “You want to pan the camera extra slowly, open doors, look at ceilings and floors.”

The glossy two-minute music videos still play a role: Look for their omissions. Did the camera steer clear of the bathroom? Were the curtains drawn? When a live video can be scheduled, ask to see outside the windows for a sense of light, street traffic and views.

Pay attention not just to the size of the rooms, but also to the hallways and interstitial spaces that are so important to the flow of the apartment. Is the foyer large enough to change out of your street clothes? Is the hallway narrow and dark? Do you have to walk through a bedroom to get to the bathroom?

Some brokerages are experimenting with 3-D tours that stitch together photos to create 360-degree interactive views. Matterport, a tech company with a 3-D tool set adopted by several brokerages, has a feature that allows users to trace and measure all the dimensions of a room, including square footage and height. This can be especially helpful in the co-op market, where agents rarely estimate square footage for fear of legal risks if they misrepresent the size. Condos, on the other hand, will list square footage in the building’s offering plan, but the finished apartment can still differ meaningfully from that estimate.

There are warning signs that even an in-person tour won’t reveal. Prospective buyers and renters should search the Department of Buildings website for building violations that could be deal breakers. Are there unresolved elevator issues? Have there been reports of mold or plumbing issues? 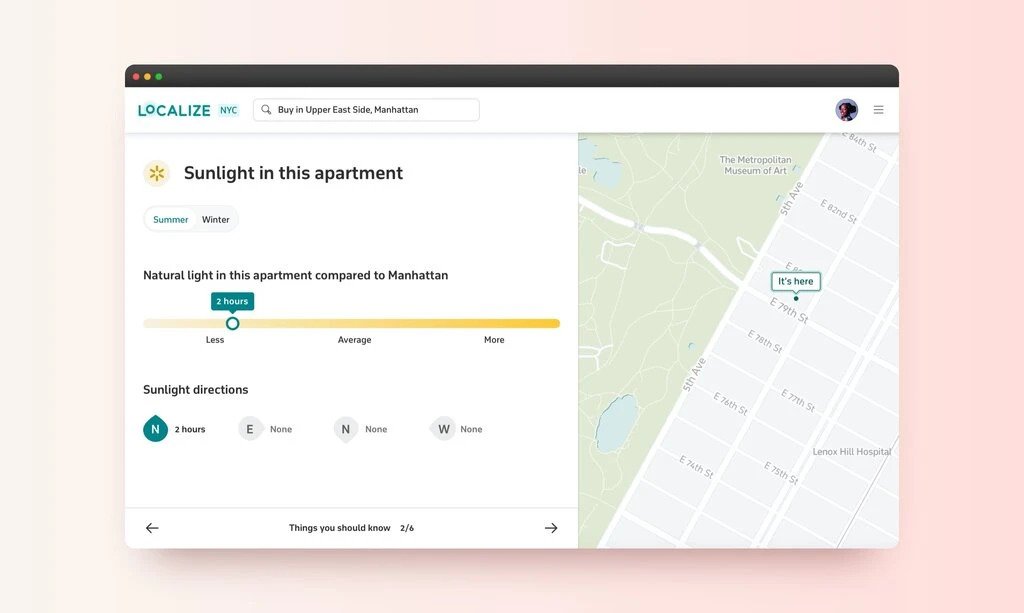 Some websites use public and proprietary data to help shape your decision. Localize.city has a feature that rates the quality of sunlight for thousands of listings in New York.

Real estate data aggregators, like Zillow and Neighborhood Scout, can help identify neighborhood characteristics including crime statistics and school ratings. Localize.city, a listing and data company, has also created an algorithm for rating the quality of natural light for thousands of listings in New York City. The site also tracks nearby construction jobs that could fray the nerves of homebound residents or someday block their open views.

Once a buyer is serious about proceeding, the buyer’s lawyer should review the building’s co-op or condo board minutes, Ms. Leifer said. Buried in the meeting notes could be clues about past bed bug infestations, the building’s financial health, the owner-occupancy rate, and upcoming assessments, among other insights.

Stefanos Chen is a real estate reporter, based in New York. He joined The Times in 2017 after five years with The Wall Street Journal, where he was a reporter and multimedia producer. @stefanoschen